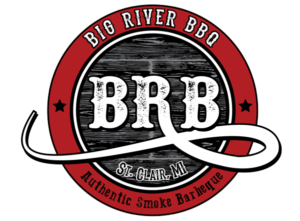 About Us & Photo Gallery

You’re going to love it!

Let us introduce ourselves…

Growing up in the Blue Water Area, the founder of Big River BBQ, Jeff Cook, loved watching the beautiful St. Clair River flowing southbound and the giant lake freighters that are the king of the waters in the wonderous settings of the Great Lakes State. Rarely, however, was it ever called by name…most folks just called it, “The Big River.” So, when it came time to name his new company, there was little hesitation that the name that was most representative of the area and the fledgling company’s “big” goals was, Big River Barbecue…BRB for short.

Yes, there is a bit more to the story…BRB’s founder has always loved great BBQ, particularly pork ribs, and he set out at a young age to master both the barbecue pit and the grill top. Pork is a perfect meat for both the grill and the pit and also a great meat selection to best learn the skill necessary to master both methods of cooking…pork butt, pork steak, pork loin, pork belly, bacon and of course, pork ribs…Baby Back, St. Louis or Country-Style, he loved them all. Then it was chicken and on to beef and now its just about anything you can think up that you want to kiss with some smoke. He prefers pit smoking more than any other method and believes that the greatest achievements in taste can be found employing authentic slow smoke techniques…if you’ve had his barbecue we believe you’d agree.

However, the conception of BRB was borne on the small back deck of a home in St. Clair, MI, out of a small Smoke Hollow smoker bought at a local Meijer store…somewhat on a whim, and later confirmed when he was bound to prove his then girlfriend, now wife, wrong, that in fact, he would use that thing, and from there it became a passion. A passion that continues to grow as does the business. A once few months a year side hustle for family and friends, has grown into an award-winning year-round catering company; BRB has elevated itself to one of the finest dining experiences in the Blue Water Area.

At last, one of the founder’s most important goals and aspirations will see reality, when “small-batch” production of a once-famous St. Clair meat market owned by the Gliem’s Family that operated over 50 years ago.

So, you see, it’s really about family, small town life and big-time ambition, a driven passion to start something new as well as a resurrection of a sought-after batch of recipes that once were the talk of the town. The next chapter begins…

How it all came to be…

As a mobile catering company, Big River BBQ has had its home headquarters throughout the Blue Water Area and have been proud to serve customers up and down the river and many metro Detroit suburbs throughout southeast Michigan. Looking to expand both its reputation and exposure, Big River BBQ founder, Jeff Cook, is excited to take the next steps in the company’s growth from back porch hustle to meeting long-term aspirations of having its own little corner of the world that spotlights BRB’s outstanding smoke barbecue and perhaps a revival of a once-famous and long sought-after hot dog. These passions will continue to be the driving force behind the growth of the company; and, we are fired up to make it happen!

A little bit of hardware to prove our worth…

If you need catering, do yourself a favor, make life easy and have Big River BBQ take care of everything!

The food was great, the help was extremely friendly, all of our guests were satisfied and best of all, the price was extremely fair. We look forward to having them on hand for our next function.

I had Big River BBQ cater my party of 90 people. They were fabulous. The BBQ was awesome! My party goers are still raving about the food a year later.